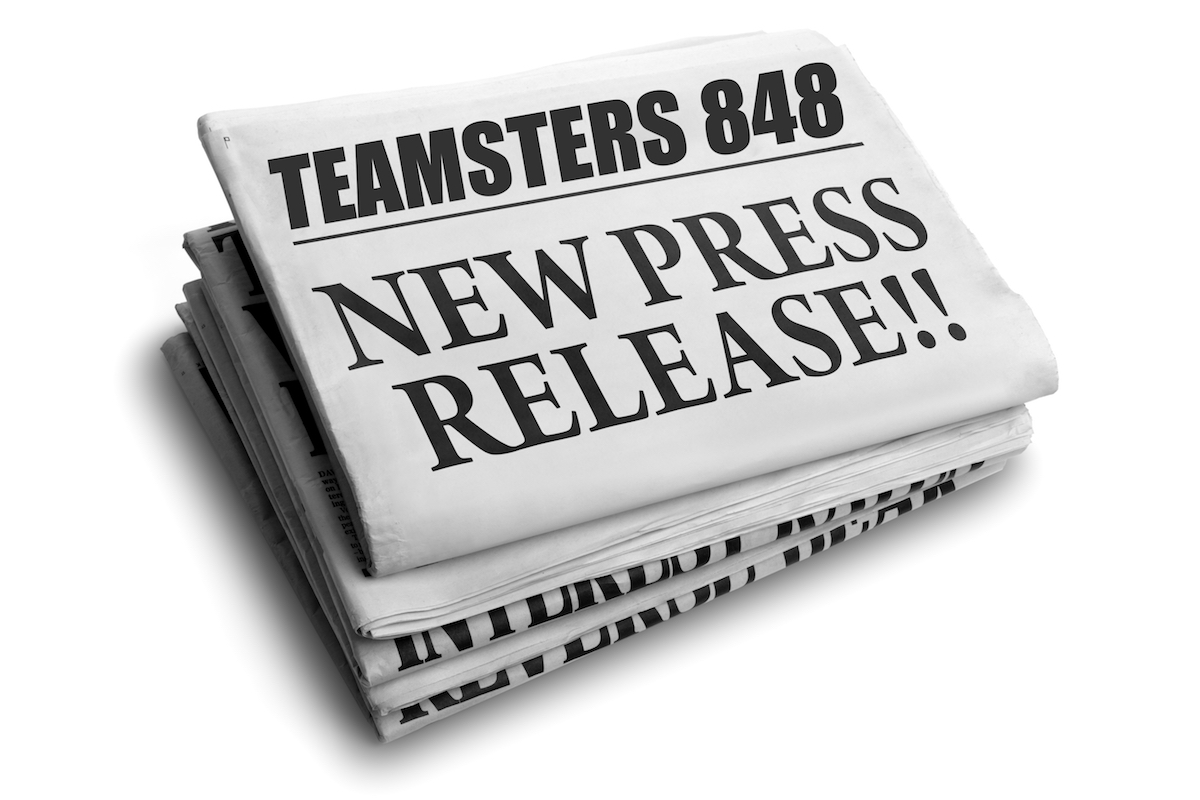 Los Angeles, CA – Today, the Los Angeles City Council, which oversees the largest container port in North America, unanimously vetoed the Foreign Trade Zone Operating Agreement (FTZ) granted by the Port’s Harbor Commission to California Cartage’s warehousing and port trucking operations located on Port property in Wilmington, CA. The FTZ designation provides a clear competitive advantage to NFI/Cal Cartage, the largest trucking and warehousing operation at the port, by providing tax breaks to its retail clients. The Los Angeles Harbor Commission approved the FTZ for Cal Cartage, which was purchased by NFI Industries in October 2017, despite the ongoing pattern of violations of health and safety, employment, and labor laws at the company (see list of legal and regulatory action below).
For the past three years, NFI/Cal Cartage warehouse workers and port drivers have persistently demanded that the LA Harbor Commissioners address the enduring law-breaking at the company’s warehousing and trucking facilities, which are located at 2401 East Pacific Coast Highway, which is owned by the Port of Los Angeles. This site includes the NFI/Cal Cartage warehouse and two related trucking companies, K&R Transportation and California Cartage Express.
“We entrust our City authorities with ensuring compliance with all City contracts, especially when these agreements give corporations like NFI/Cal Cartage a competitive advantage,” said Eric Tate, Secretary-Treasurer, Teamsters Local 848, in a letter to Councilmembers in advance of the vote. “Given the sheer volume of government findings, ongoing investigations, and unmistakable evidence that Cal Cartage is a recidivist law breaker, it is overwhelmingly clear to us that the Harbor Commission failed to ensure that Cal Cartage meets the necessary requirements in the Operating Agreement.”
“Time and again I have told the LA Harbor Commission that NFI/Cal Cartage is breaking the law by misclassifying me as an independent contractor yet they continue to give sweetheart deals to the company,” said Gustavo Villa, a misclassified port truck driver employed by Cal Cartage Express. “I am so grateful that Councilmember Buscaino stepped in to block this sweetheart deal for a company that has shown no regard for the laws of the land.”
“For the past four years, I have worked at the Cal Cartage warehouse and have been outspoken about the unsafe conditions there. There are forklifts that don’t brake and the high heat is a problem. A co-worker got sick because of the over 100 degree heat inside the container and management said to just cover him with boxes,” said Bruce Jefferson, a Cal Cartage temp warehouse worker. “Every job at the ports should be a good and safe job, and I’m glad that the City Council agrees that no special tax breaks should be given to companies that are breaking the law.”
“We should never give incentives, like the Foreign Trade Zone Permit, to law-breaking companies where abuse and pressure to work quickly are common, where faulty brakes on forklifts are left unrepaired, and where truck drivers continue to drive for 18-20 hours per day for pennies,” said Alice Berliner, Southern California Coalition for Occupational Safety & Health (SoCalCOSH). “When the Harbor Commission renewed the NFI/Cal Cartage Foreign Trade Zone Permit, they sent the message that it’s okay to pay workers poverty wages, it’s okay to steal drivers’ wages, it’s okay to allow occupational injuries, and in some cases fatalities, on City property. And most importantly, when the Harbor Commission renewed NFI/Cal Cartage’s FTZ Agreement, it sent the message that the City of Los Angeles condones this abuse. Today’s Council veto of the Agreement reverses this unjust decision and sends a strong message that worker health and safety matters.”
On April 5, 2018, the LA Harbor Commission approved a one-year Foreign Trade Zone (FTZ) Operating Agreement with the company. On April 17, 2018, the LA City Council approved a motion filed by Los Angeles City Councilmember Joe Buscaino to assert jurisdiction over the matter, and on May 1, 2018, the Trade, Travel, and Tourism Committee recommended that Council veto the Harbor Commission’s approval of the FTZ agreement. Today, the full City Council voted to veto NFI/Cal Cartage’s FTZ Operating Agreement.

California Cartage, based in Wilmington, CA, is one of the largest goods movement companies in America, with warehouses and port trucking operations across the U.S. Referred to herein as “NFI/Cal Cartage,” this family of companies was recently acquired by the New Jersey-based National Freight Industries (NFI). Previous to this acquisition, Cal Cartage was owned and managed by Robert Curry, Sr. and his family. NFI/Cal Cartage represents the largest trucking operation at the Ports of Los Angeles and Long Beach by a wide margin.

The NFI/Cal Cartage family of companies includes five major trucking operations at the Ports of LA and Long Beach. The four largest – K&R Transportation, California Cartage Express, ContainerFreight EIT and California Multimodal LLC (CMI) – have been facing multiple claims in the courts and government agencies for misclassifying their drivers. In several instances, agencies have already determined that drivers were, in fact, employees. K&R and California Cartage Express operate out of the same property as the Cal Cartage warehouse (described in the following section), CMI operates out of a nearby Wilmington yard, and ContainerFreight operates out of a yard in Long Beach. Combined, more than 600 alleged misclassified drivers work for these companies.

Cal Cartage Container Freight Station in Wilmington, CA, is a warehouse and freight center on Port of LA property and employs approximately 500 workers, with 80 percent of the workforce being employed through a temp agency. While Cal Cartage warehouse workers once had good paying jobs that provided benefits, they have not had representation from a union in over 30 years and conditions have suffered. Workers are now paid the state minimum wage with little or no benefits (even though they are entitled to a higher wage under the Los Angeles Living Wage Ordinance), and work in health and safety conditions that are deplorable. The company has been cited for serious health and safety violations twice in the past three years, and workers face serious retaliation resulting in unfair labor practices charges and five strikes.

The warehouse facility has health and safety issues. The building was built in the 1940s and is poorly maintained. Several workers have been hurt just trying to walk around the facility due to potholes and poor infrastructure. The machines, including forklifts, are not maintained and often have faulty brakes and horns—leading to accidents. Workers filed a formal complaint with Cal/OSHA in June 2015, triggering an investigation at the facility. In November 2015, over $21,000 in citations were issued—4 serious and 6 general penalties. It was noted in these citations that the chipped paint at this facility contains lead.
Cal/OSHA reinvestigated the facility a year later, resulting in additional serious citations in November 2016 amounting $67,150 for the warehouse and $51,275 for the staffing agency. Citations included not providing workers with steel-toed boots, not properly attaching shipping containers to the dock, and repeat violations for unsafe brakes on forklifts. The investigation regarding the company’s abatement of these citations is still active. Workers filed a third Cal/OSHA complaint in November 2017, and the investigation is still pending.

On December 17, 2014, workers from the California Cartage warehouse on Pacific Coast Highway at the Port of Los Angeles filed a class action lawsuit alleging millions of dollars in wage theft. The workers, many of whom are paid the state minimum wage and have worked through a staffing agency for years, are entitled to the benefits of the Los Angeles Living Wage Ordinance because the warehouse where they work is operated on City of Los Angeles property. Despite this, the workers at the warehouse have not been paid the applicable living wage rate in the 18 years since the ordinance passed.
Under the City of Los Angeles Living Wage Ordinance, Cal Cartage is currently required to provide each worker with either $12.52 per hour for an all-cash wage or $11.27 per hour plus $1.25 per hour in health benefits and as of July 1, 2017, it will go up to be $12.73 all-cash wage or $11.48 plus $1.25 in health benefits. Further, each worker is entitled to 12 paid days off per year. The law extends the obligation to any staffing agencies that are contracted by Cal Cartage and that directly employ more than 50 percent of the workers in the warehouse facility.
The case is currently in mediation proceedings.
NFI/Cal Cartage’s key customers include: Lowe’s, Amazon, TJ Maxx, Home Depot, Kmart, and Sears, as well as the U.S. Department of Defense.