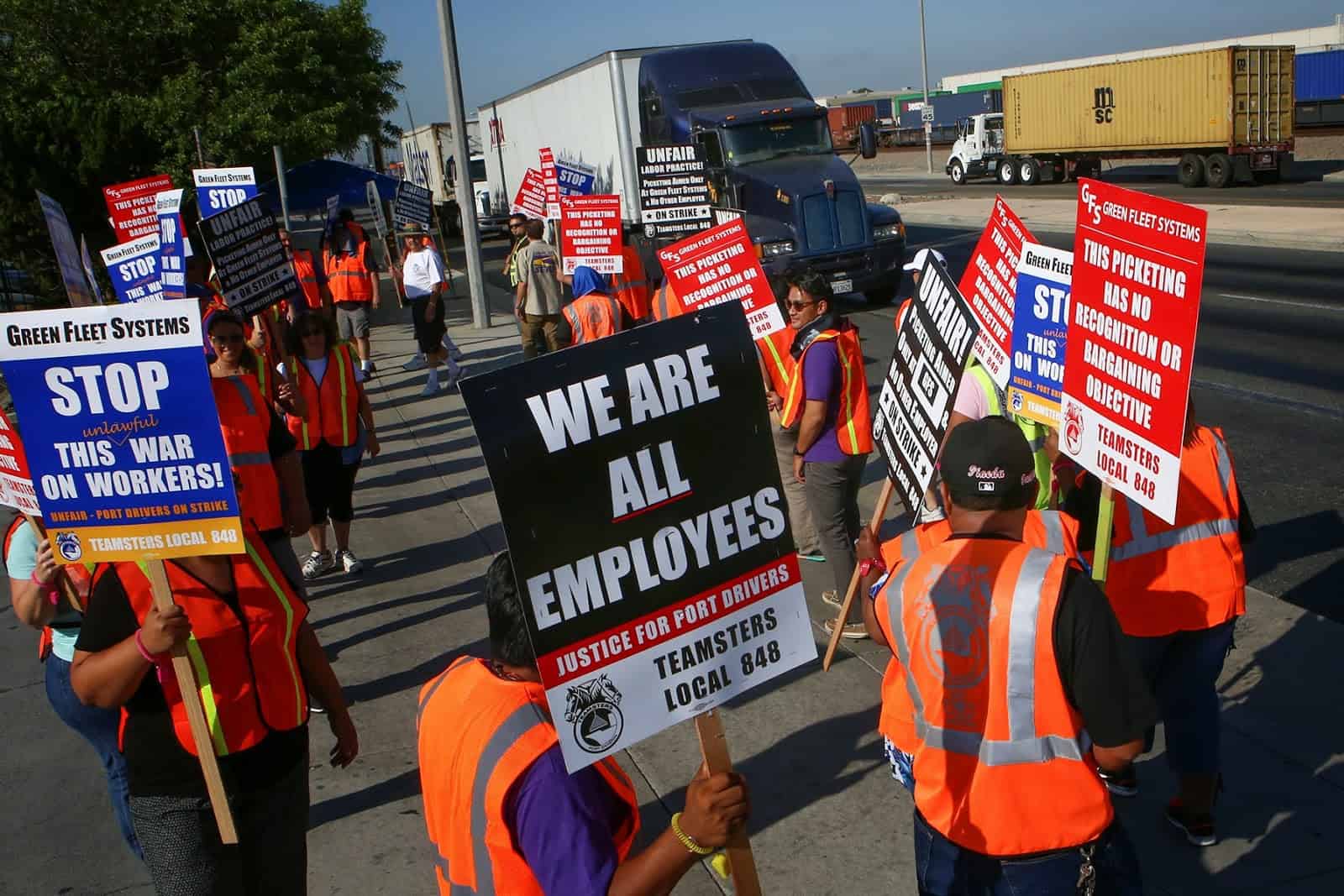 Striking Port Drivers with TPS Threatened by Cancellation to Surround LA Detention Center on 3rd Day of Strike, Rally at Port of LA for Permanent Protections

LOS ANGELES, CA — The Los Angeles Detention Center will be surrounded by a convoy of half dozen tractor-trailers driven by members of the Teamsters union in support of port truck drivers and others threatened by deportation if the courts don’t stop the termination of Temporary Protected Status (TPS) or Congress doesn’t act to pass permanent protections.
Thousands of port truck drivers across America who haul containers on and off the docks of seaports and railyards are among the 300,000 workers with TPS demanding action for permanent protections and a path to citizenship.
On Wednesday, October 3, they will demonstrate the contribution they make to this country and the urgency with which they need Congress to act to address and resolve this crisis.
After rallying at the downtown detention center, the drivers will caravan down the 110 Freeway to the Port of LA’s Wilmington Waterfront Park, where they will hold a rally on the third day of their strike.
ACTION #1
What: Tractor Trailer Caravan Around the LA Detention Center
When: 8:30 am, October 3, 2018
Where: LA Metropolitan Detention Center, 535 Alameda St, Los Angeles, CA 90012
Who: Striking port truck drivers, including many threatened with deportation because of the revocation of their status in the TPS program, striking warehouse workers, Teamsters, Working Families United, National TPS Alliance, LA County Federation of Labor, CARECEN, National Day Laborer Organizing Network
ACTION #2
What: Rally at the Ports to Support Striking Drivers, Demand Action on TPS
When: 11:00 am, October 3rd, 2018
Where: Wilmington Waterfront Park, W. C Street, Wilmington, CA 90744 (at N. Wilmington Blvd.)
Who: Teamsters, Working Families United, National TPS Alliance, LA County Federation of Labor, CARECEN, National Day Laborer Organizing Network, Los Angeles Alliance for a New Economy (LAANE), Clergy and Laity United for Economic Justice (CLUE)
Background
Drivers at the Ports of Los Angeles and Long Beach have been challenging their misclassification as “independent contractors” and exercising their rights as employees by engaging in collective action in the courts, in their truck yards, and at the ports – including 15 strikes in the last five years. It is estimated that there have been legal misclassification claims pursued on behalf of at least half of the misclassified drivers at America’s largest port complex, either by drivers filing individual wage claims or being part of class action lawsuits. Upon investigating the facts, multiple agencies and courts at both the state and federal levels have determined that drivers are, in fact, employees and therefore protected by employment and labor laws. Read more
XPO Logistics (NYSE: XPO) is a global logistics company with revenue in excess of $15 billion. XPO Port Services, which specializes in moving goods to and from the ports, and XPO Cartage, which moves goods to nearby intermodal rail yards, are together among the top trucking companies servicing the Ports of Los Angeles and Long Beach. There are approximately 280 alleged misclassified drivers working for both companies in their LA-area locations and about 160 additional drivers in XPO Cartage’s San Diego facility. XPO and its subsidiaries are facing multiple legal and enforcement agency actions for alleged wage theft due to misclassification of their drivers as independent contractors. Read more
NFI Industries is one of the largest goods movement companies in America, with warehouses and port trucking operations across the U.S. In 2017, NFI purchased the California Cartage family of companies, which were – and continue to be – the largest drayage and warehousing operating at the Ports of Los Angeles/Long Beach.
The NFI/Cal Cartage family of companies includes five major trucking operations at the Ports of LA and Long Beach. The four largest – K&R Transportation California LLC; Cal Cartage Transportation LLC, Container Freight Transportation LLC, and CMI Transportation LLC – have been facing multiple claims in the courts and government agencies for misclassifying their drivers. Combined, more than 600 alleged misclassified drivers work for these companies. Cal Cartage Container Freight Station in Wilmington is a warehouse and freight center on Port of LA property and employs approximately 500 workers, with 40-50 percent of the workforce being employed through a temp agency. The company has been cited for serious health and safety violations twice in the past three years, and workers face serious retaliation resulting in unfair labor practices charges and five strikes. Read more