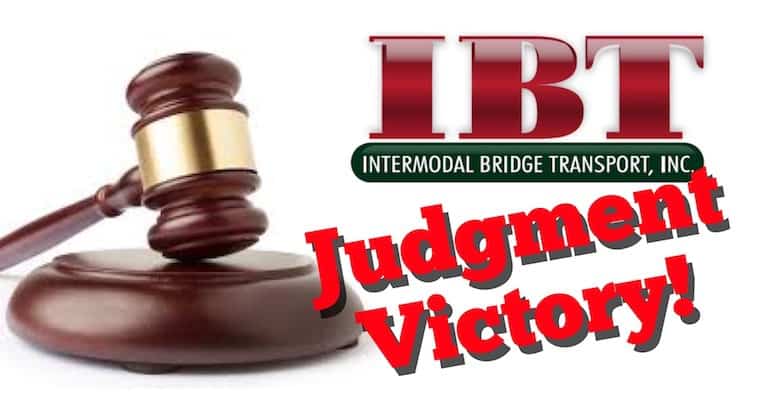 Ports of Los Angeles/Long Beach, CA –An Administrative Law Judge (ALJ) has issued a decision in the case based on charges originally filed in 2015 by the International Brotherhood of Teamsters alleging violations of the National Labor Relations Act (NLRA) by Intermodal Bridge Transport (IBT), specifically to stop drivers from exercising their right to form a union to improve their wages, benefits, and working conditions. The charges filed by the Teamsters included an allegation that misclassifying workers as “independent contractors” is in and of itself a violation of the NLRA. On November 28, 2017, Administrative Law Judge Dickie Montemayor issued a detailed ruling in which he agreed with the Teamsters that “misclassifying employees as independent contractors” is an “unfair labor practice” and a violation of their rights under the NLRA (which only covers employees, not legitimate independent contractors).

The ALJ’s ruling comes after multiple strikes by drivers at IBT, claims for wage theft, a class action lawsuit, and a national exposé unequivocally validating port drivers’ demands for justice. In fact the company lost an account with one its customers, Michael Kors, purportedly due to the prolonged labor dispute.

“Every day, I move containers filled with products destined for Target, Amazon, or General Electric from the docks to local warehouses, where they begin their journey to homes across the country. I’m proud to be a vital part of our local and national economy but Intermodal Bridge Transport has made it increasingly difficult for me to make a living by illegally, and immorally, classifying me as an independent contractor instead of an employee. As a result, I am saddled with debilitating costs – everything from fuel to insurance to the lease for the truck are deducted from my paycheck leaving me with barely enough to get by – and deprived of my essential rights as a worker and a human being.  With this ruling, justice has been served and the company can no longer deny me my employee rights.”

Intermodal Bridge Transport (IBT) – a subsidiary of COSCO Group, which is owned by the Chinese Government – specializes in the movement of containers and trailers from major ports and inland railroad hubs to customers. The company is headquartered in New Jersey and has operations at the Port of New York/New Jersey, as well as at the Ports of Los Angeles/Long Beach, Charleston, and Savannah. There are about 85 misclassified drivers working for IBT’s operations at the Ports of Los Angeles/Long Beach, where IBT is among the top 20 port trucking companies in terms of cargo movement.  IBT’s main customers include , Target, General Electric, Trek Bicycle,  Sony and Amazon.

IBT’s misclassification of its drivers has been under scrutiny by government agencies, which have found upon investigation that IBT drivers are employees, not independent contractors. In addition, IBT is facing significant liability from several private legal actions related to misclassification. The California Division of Labor Standards Enforcement (DLSE) issued a decision on April 20, 2017 on wage claims filed by three IBT drivers, determining them to be employees – not independent contractors – and therefore owed a total of $127,835. IBT has appealed these decisions, which are now pending in CA Superior Court. IBT is also facing a major pending class action lawsuit filed by drivers alleging wage theft and illegal misclassification. In addition, at least 40 drivers have filed separate individual and “mass action” claims in California Superior Court against IBT for the same violations of the California Labor Code, which also remain pending.